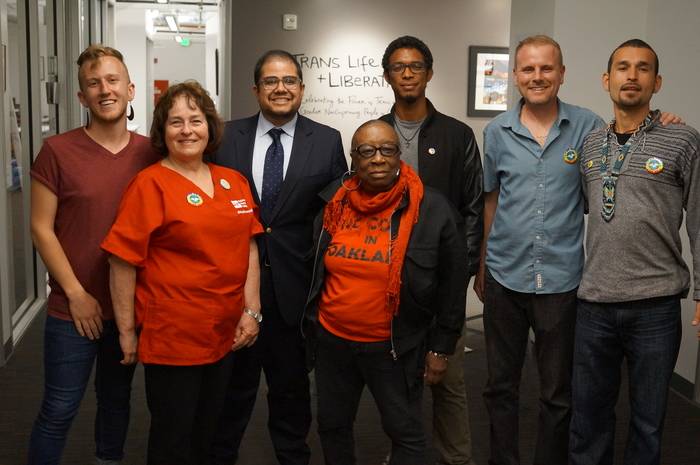 “In this age of divide and conquer politics, it is imperative that we work together to ensure NAFTA is not made worse,” said California Trade Justice Coalition Lead Organizer Will Wiltschko. “The stories shared at the forum highlight the urgency of this issue.”

Here are some highlights from the stories speakers shared:

Gerardo Omar Marín is a first generation MeXicano, food sovereignty activist, urban farmer, and traditional healer, and serves as Youth Rising Director of The Pollination Project. He opened the event with an invocation of our histories as descendants of indigenous peoples and by centering us on our connection with the land beneath us. Gera, who grew up crossing man-made borders between the United States and Mexico, told the stories of his critical work mentoring and uplifting Black and Brown youth in the East Bay, emphasizing that a new vision for trade must mean creating opportunities for justice and better relationships with the planet in our communities. Find out more about Gera’s work by reading up on the Pollination Project and Rooted in Community.

Margaret Gordon is a pillar in the West Oakland and national environmental justice community, and is Co-Director of the West Oakland Environmental Indicators Project. She spoke about the disproportionate impacts of freight-related transport on workers and in her community in West Oakland, where asthma rates are astoundingly high as a result of diesel trucks and shipping-related pollution. Ms. Margaret connected the dots between trade, community health, and workers rights, asking us to come together to demand that any and all new trade deals include a shift away from diesel and toward electric-powered shipping that prioritizes clean air in communities of color over corporate profits. Find out more about her work with the West Oakland Environmental Indicators Project.

Joell Echevarria, a young racial justice advocate, was born in San Francisco and raised in the South. He spoke to us about his experience working in the fossil fuel industry and the horrible health and safety conditions that low-wage workers are subjected to an economic climate facilitated by the promotion of international trade at the expense of workers’ rights. Like Gera, Joell spoke to the importance of organizing economically insecure young people around racial, economic, and environmental justice and the role mentorship and cultural work play in his grassroots organizing work. Find out more about his work with Hip Hop for Change and Rooted in Resilience.

Malinda Markowitz, Co-President of the California Nurses Association (CNA) and a leader in the national struggle for healthcare reform, invited us to join the fight for affordable and quality health care for all. As a nurse, Malinda has seen first-hand that people across California are dying because they can’t afford life-saving medicines. Trade deals like NAFTA make these problems worse by prioritizing the protection of intellectual property of big pharmaceutical, thereby raising the prices of essential drugs both in the US and abroad. She noted that Trump’s proposed reforms to NAFTA would only make this problem worse. Find out more about the California Nurses Association and their work advocating for single-payer health care.

In March, President Trump’s much-anticipated NAFTA proposal circulated through the halls of Congress, but appeared only to seek modest, corporate-friendly tweaks to what he once called the “worst trade deal” ever.  “The Trump Administration is clearly siding with corporations over working people in a process that’s secretive and undemocratic,” said Aaron Lehmer-Chang, Director of the California Trade Justice Coalition. “Thankfully, people from Oakland to Washington are standing up to Trump’s trade hypocrisy and demanding that he prioritize working families and our environment over more corporate profits.”

Check out our photo gallery here and check back soon for videos from the event!