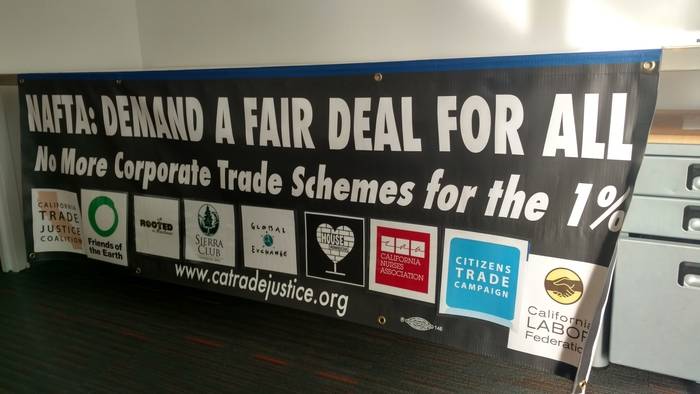 Despite President Trump’s heated rhetoric against the North American Free Trade Agreement (NAFTA), a recent draft of his plans to modify the pact bears a striking resemblance to the same corporate-friendly, TPP-like trade agenda that he claimed to oppose during his campaign.

Last week, the administration’s much-anticipated NAFTA proposal circulated through the halls of Congress, but appeared only to seek modest tweaks to what Trump once called the “worst trade deal” ever. Instead of sweeping changes to stop the offshoring of manufacturing jobs or to eliminate NAFTA’s corporate court system that’s weakening U.S. labor and environmental laws, the plan would expand protections for digital trade and commerce, strengthen intellectual property rights for corporations, and preserve NAFTA’s ban on Buy American programs.

In response, labor organizations are criticizing the proposal for its similarity to the now-defunct Trans-Pacific Partnership (TPP), which was so widely opposed it failed to secure enough votes in Congress. “This plan represents the ultimate betrayal of working people by the Trump Administration,” said Robert Longer, Political Coordinator for the Communications Workers of America, District 9. “In modeling NAFTA renegotiations after the failed TPP, President Trump has made clear that corporate rights take priority over the lives of the American people.”

“The Trump Administration is blatantly siding with corporations over working people in a process that’s as secretive and undemocratic as the TPP fiasco,” said Aaron Lehmer-Chang, Director of the California Trade Justice Coalition. “Thankfully, people are standing up to Trump’s trade hypocrisy and demanding that the health of our communities and our environment come first.”

In the months ahead, the California Trade Justice Coalition and its allies are hosting a series of town halls highlighting NAFTA’s negative impacts, while promoting positive solutions that can improve local economies, communities, and environmental health across North America.