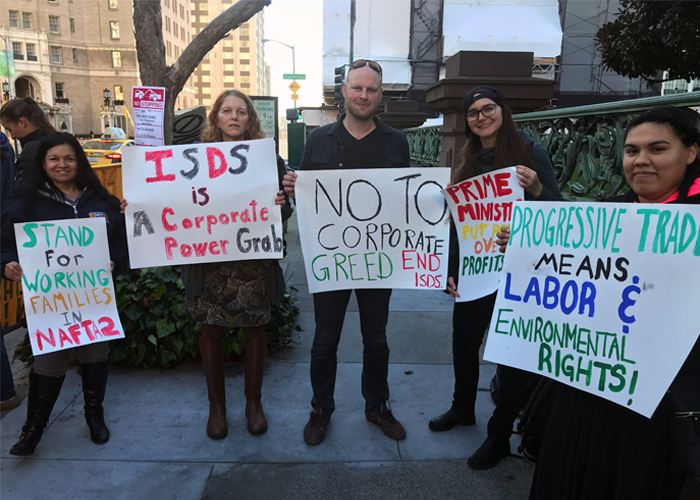 California — Activists from the California Trade Justice Coalition, the United Steelworkers and the Sierra Club held actions outside Prime Minister Trudeau’s meetings in San Francisco and Los Angeles to demand he push for a progressive renegotiation of the North American Free Trade Agreement (NAFTA).

“Since the day NAFTA was signed into law, workers in the United States, Mexico and Canada have suffered from its impact and have hoped for its reform or repeal. Multinational corporations have set the agenda for too long and the result has been increasing trade deficits, job loss, community and environmental devastation and rising income inequality. Prime Minister Trudeau said NAFTA needs to include robust and sound labor and environmental standards. We need him to stand by those words to ensure working families in Canada, Mexico and the U.S. are all protected.” said Catherine Houston, the Policy and Legislative Coordinator & California Political Director for United Steelworkers District 12.

Fair trade activists throughout the country held Prime Minister Trudeau accountable on his pledge to push for progressive principles in NAFTA renegotiations, meeting him each of the US cities he visited last week.

“After six major rounds of NAFTA negotiations, the Trump administration still hasn’t agreed to the strong labor and environmental provisions needed to protect jobs in the U.S. and Canada, to protect human rights in Mexico and to raise wages continent-wide. Working families throughout North America are counting on Prime Minister Trudeau to stay true to his pledge to fight for these issues in any NAFTA replacement” said Will Wiltschko, Director of the California Trade Justice Coalition.

Prime Minister Trudeau has stated he wants to push for progressive trade deals but he has not proposed adding strong and enforceable labor and environmental standards to NAFTA, which many organizations have called necessary to make NAFTA a deal that benefits working people and the environment.