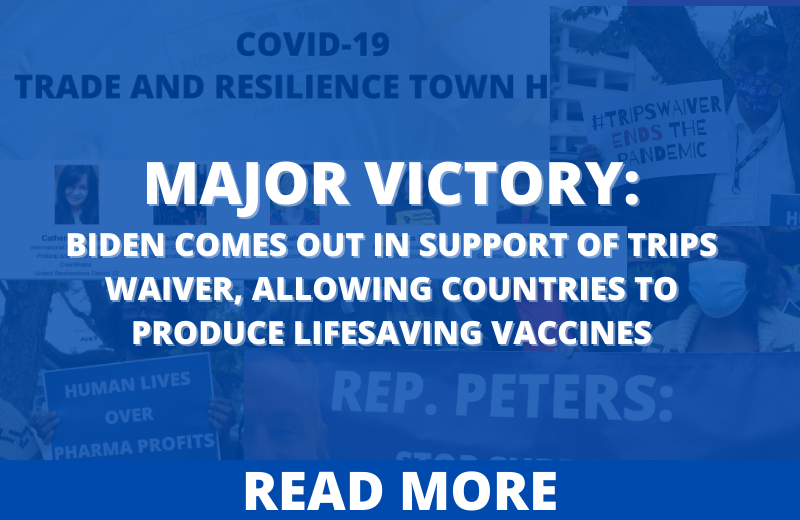 Berkeley, CA — In response to news that the United States is reversing its opposition of a waiver of intellectual property rules at the World Trade Organization so that COVID vaccines can be produced around the world, California Trade Justice Coalition, which helped organize Congressional and organizational support for the waiver, released the following statement by its director, Will Jamil Wiltschko:

“President Biden’s support for the TRIPS waiver is a critical and humane step in ending the global pandemic. This is a huge victory for the California Trade Justice Coalition and activists around the world. Numerous reports say that a pivotal factor in getting Biden to take this stance was a sign-on letter in favor of the waiver, signed by most Congressional Democrats. It’s clear that California Representatives and the support of our coalition members made this victory happen.

“It is imperative that we continue our work to make sure the waiver moves forward as effectively as possible, but we shouldn’t downplay the fact that millions of lives might be saved by this important first step.

“The devastation in India continues to shock the world’s conscience and people there are still faced with indescribable suffering. As long as large populations around the world have to wait to be vaccinated, we ourselves continue to risk a viral mutation that can evade current vaccines and reignite the pandemic for all of us. Our hope is that opponents of the waiver lift their blocks against it, and that a final agreement is reached as quickly as possible. COVID vaccines were developed with broad public support, and everyone worldwide deserves access to them. This victory is shared with the hundreds of organizations and millions of individuals who urged this to happen.”