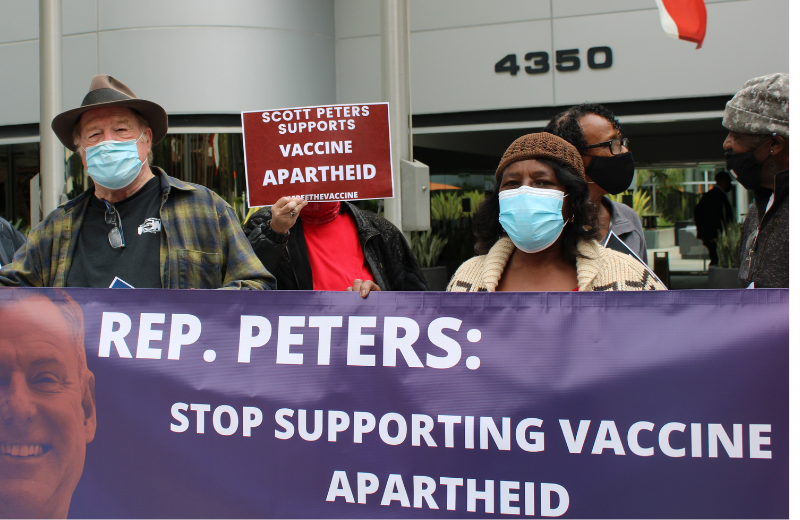 San Diego, Calif. — Public health advocates, frontline unions and others held a rally outside the office of U.S. Representative Scott Peters today urging him to stop attempting to block low- and middle-income nations’ ability to scale up production of COVID-19 vaccines and treatments. They argue the Congressman’s actions not only threaten millions of lives abroad, but risk prolonging the pandemic for Californians as well.

“Representative Peters is putting pharmaceutical company profits ahead of increasing global access to COVID-19 vaccines,” said Will Jamil Wiltschko, director of the California Trade Justice Coalition. “His demand that low- and middle-income nations enforce pharmaceutical monopolies instead of increasing production of COVD treatments and vaccines as quickly as possible is exacerbating vaccine apartheid and threatens lives both abroad and here in San Diego.”

While an increasing number of Californians are getting vaccinated against COVID-19, large populations in poorer nations aren’t expected to be vaccinated for years unless vaccine supplies are dramatically increased.

Representative Peters is actively opposing an emergency waiver of intellectual property rules at the World Trade Organization that would allow COVID vaccines, test kits and medications to be produced in as many places as possible as quickly as possible. The so-called “TRIPS waiver” is backed by over 100 nations, as well as hundreds of U.S. civil society groups such as Doctors Without Borders, Partners In Health, the American Medical Student Association, National Nurses United, Amnesty International, Oxfam, Human Rights Watch and others.

“Working people in California have put their lives on the line to feed their families and keep vital services and industries going for everyone during the COVID crisis,” said David Campbell from USW 675. “Allowing people in developing countries to go unvaccinated for years more to come not only threatens their lives, but will increase the risk of a viral mutation that can evade the current vaccines and start the pandemic all over again for everyone. I’m angry that Congressman Peters is so callous to the lives being lost abroad, and also to the increased risk he’s putting on the health and livelihoods of everyone here at home.”

A recent public opinion poll shows that a majority of voters across the political spectrum support a temporary waiver of patents for COVID vaccines in order to speed production and reduce costs for developing countries.

“The fact that Congressman Peters received hundreds of thousands of dollars in campaign contributions from the pharmaceutical industry in recent years may be what’s clouding his judgement on this issue,” said Jamil Wiltschko. “Regardless, his constituents need him to tell Big Pharma ‘no’ on this issue, and do what’s needed to stop vaccine apartheid and end the pandemic.”