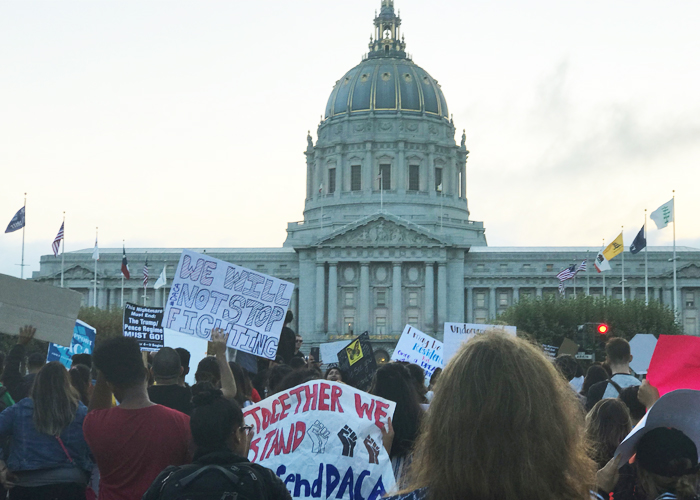 On Tuesday, September 5th, the Trump Administration announced the repeal of Deferred Action for Childhood Arrivals (DACA). The California Trade Justice Coalition condemns this decision and supports those who received DACA along with the millions who did not.

The United States has long played a part in the destabilization of other countries. Corporate driven trade deals like the North American Free Trade Agreement (NAFTA) have forced people to migrate to the United States in search of better lives. People should not be compelled to leave their homes, and those who have been displaced should be treated with fairness and compassion.

Over the past few decades, it has also become increasingly difficult to navigate the existing immigration system in the United States. Attempts to pass comprehensive reform have stalled, and temporary measures like DACA were put in place with the hope that there would eventually be extensive legislative action.

People who come to this country in search of a better life should not be punished for it. We will stand with the millions of undocumented people in this country who want to contribute to our society and oppose those who wish to tear apart families and communities.

“Our commitment to all immigrants, regardless of status, remains firm.  The vast majority of immigrants in this country have had a positive impact on our lives.  They are part of the interwoven, strong fabric of our neighborhoods.  We reject the notion that some immigrants are more worthy than others, and embrace the fact that each individual has a unique and equal potential to contribute to this wonderful country of ours.”

“Our country has had a broken immigration system for some time and it unjustly criminalizes those among us who contribute to our communities. Many of us know people who did not qualify for DACA yet still worked just as hard and contributed to our society as much as any citizen. We refuse to turn our backs on our friends, neighbors, co-workers, family, and community members because of the circumstances of their birth.”

“The environmental movement stands in support of the entire immigrant community. We believe immigrants, regardless of status, have contributed immeasurably to our country and that we must continue the fight against attempts to center policies around bigotry and hate.”