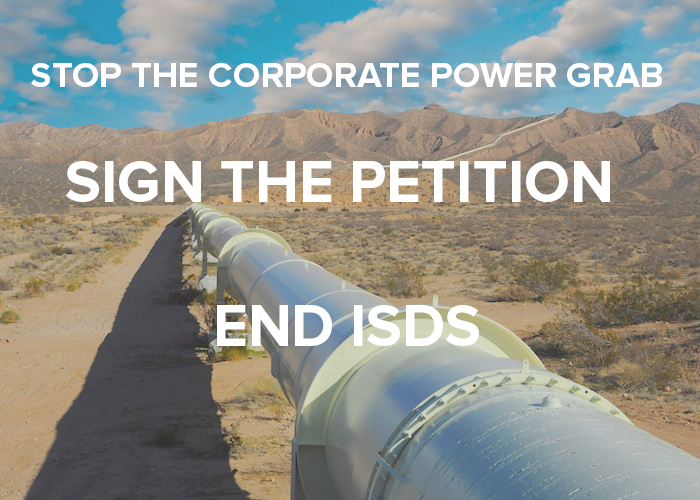 The second round of renegotiation of the North American Free Trade Agreement (NAFTA) has already concluded, and it’s still unclear whether U.S. negotiators are going to demand the removal of a controversial NAFTA provision that gave big corporations vast new powers to that make it easier to offshore jobs and to attack the environmental and health laws on which we all rely.

Trade deals like NAFTA give transnational corporations the power to sue governments in front of a tribunal of thee corporate lawyers.  These lawyers can order taxpayers to pay the corporations unlimited sums of money, including for the loss of expected future profits.

The corporations only need to convince the lawyers that a law protecting public health, workplace safety or the environment violates their special NAFTA rights.  The corporate lawyers’ decisions are not subject to appeal.

This corporate power grab is formally called Investor-State Dispute Settlement (ISDS).  ISDS makes big corporations feel safer moving jobs around the globe to wherever workers are the most exploited and environmental regulations are the weakest, and it also puts democratically-enacted public interest laws in jeopardy both at home and abroad.

Throughout the world, numerous countries have begun rejecting international agreements that contain ISDS.  It’s time for NAFTA negotiators to do the same.

TAKE ACTION: Please add your name to this petition demanding that any NAFTA renegotiation remove the corporate power grab known as ISDS.

While many changes are needed to make a NAFTA replacement deal work for working families and the planet, if trade negotiators maintain ISDS, we’ll know the renegotiation has been hijacked by special interests intent on preserving corporate power.  Help end ISDS now.