URGENT APPEAL: Help Make Sure We Defeat the TPP! 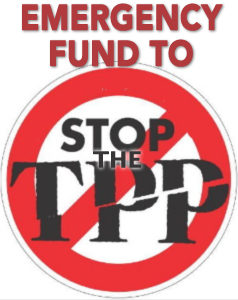 With Election Day upon us, all eyes are on the future direction our great nation will take. It’s comforting to know that both major presidential campaigns are speaking out strongly against the Trans-Pacific Partnership (TPP), along with a deep and wide cross-section of Americans.

But make no mistake about it: the White House plans to introduce this horrible trade scheme for a vote during the post-election Lame Duck session of Congress. THAT COULD BE IN ONE WEEK!

The corporations behind the TPP understand that 2016 is their best shot of getting this raw deal approved, so they’re going all-in on this and a mighty struggle will soon be upon us. We’re gearing up by:

Your support can make all the difference in whether we win or lose this fight. Can we count on you? Please consider a one-time donation of $25, $50, or even $100 to make sure we’re strong enough to close in on victory over the TPP by mid-November.

NATIONAL CALL-IN ACTION: Lastly, we’re calling on all our supporters to please sign up for our Thunderclap action (see below) to activate your social networks and flood Congress with #StopTPP calls November 15-17.

Thank you for all you do to help build a better future for us all, 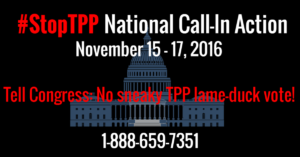 The TPP is NOT dead. Despite immense, bipartisan opposition, the White House is more determined than ever to force a post-election, “lame-duck” vote on the deal. That is the unique moment in the political calendar when representatives are least accountable to their constituents.

America’s largest labor unions, online advocacy groups, and environmental and public interest organizations are gearing up to flood Congress with #StopTPP calls November 15-17. We cannot allow a sneaky vote on the TPP during the “lame duck” session of Congress.