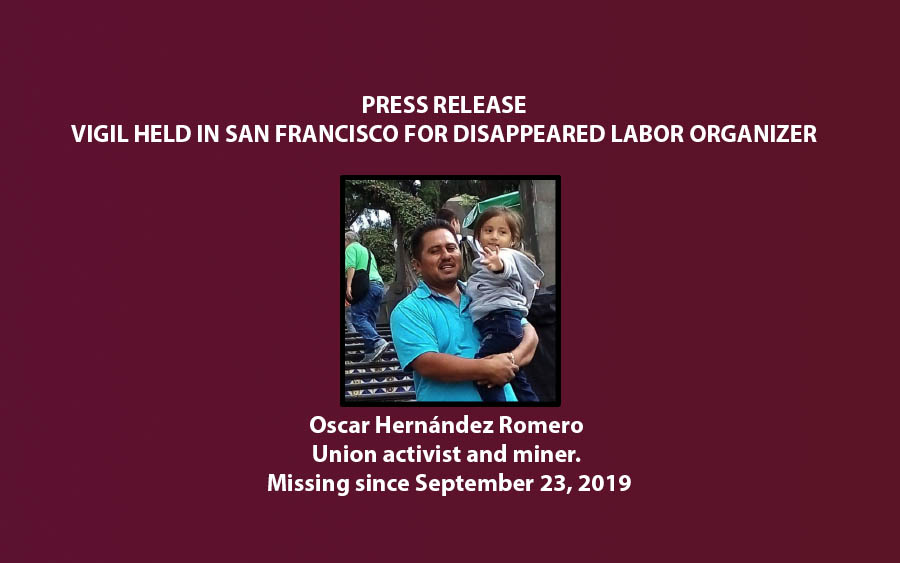 San Francisco, CA — Human rights advocates held a vigil outside the Mexican consulate today calling for an investigation into the disappearance of a Mexican labor activist and for greater enforcement of labor rights in a pending trade agreement between the United States and Mexico.

Three people attempting to organize a union at the Media Luna gold mine in southwestern Mexico have been murdered in recent years, and on September 23, labor and environmental activist Oscar Hernández Romero disappeared.  His family and coworkers fear he has also been killed, and are asking authorities to investigate.  Loved ones who have searched for his body in garbage dumps and ravines have reported receiving death threats for doing so.

“We want justice for Oscar Hernández Romero and for all the Media Luna workers,” said Catherine Houston of United Steelworkers, District 12.  “The starting wage for Media Luna miners is less than $2 an hour.  That is not enough to provide for one’s family.  Mining is hard work, and these miners deserve the right to be treated with dignity as human beings, to have enforceable labor protections, and the right to organize a union of their own choosing that is free from violence.”

Romero’s disappearance and the earlier murders of unionists Quintin Salgado, Marcelino Sahuanitla Peña and Victor Sahuanitla Peña have all come as the United States attempts to renegotiate the North American Free Trade Agreement (NAFTA) with Mexico and Canada.  Unions in all three countries have demanded stronger labor provisions in a NAFTA replacement to be backed with swift and certain enforcement mechanisms.

“Multinational corporations tend to move jobs to Mexico because of the low wages, abysmal labor conditions and weak environmental protections there,” said Rudy Gonzalez, Executive Director of the San Francisco Labor Council.  “The Trump Administration’s proposed agreement between the U.S., Mexico and Canada needs stronger terms in order to protect workers and the environment in all three countries.  NAFTA 2.0 cannot be another pact that puts corporate profits ahead of working people and the environment.”

“We support the family of Oscar Hernández Romero and his coworkers” said Ted Lewis, Human Rights Director of Global Exchange.  “The violence against the Media Luna unionists must be fully investigated and the perpetrators must be prosecuted. This case underlines, once again, why we must insist that our governments to do far more to prioritize labor rights enforcement for all workers.

“For too long, trade policies have been written to put profit above our human lives. The Media Luna workers are fighting against a system designed to exploit working people. We need our Congressional Representatives in the US to stand with working people against any trade proposal that does not include enforceable protections for working people and the environment.” said Will Wiltschko, Director of the California Trade Justice Coalition.

“Working people in San Francisco continue to stand in solidarity with our brothers and sisters in Mexico. We are calling on the US and Mexican governments to stop pushing trade policies that allow transnational corporations to exploit workers with impunity.” Said Karl Kramer of the San Francisco Living Wage Coalition